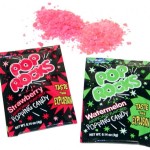 POP ROCKS® are small pieces of hard candy that have been gasified with carbon dioxide under super-atmospheric pressure. When these gasified sugar granules come in contact with moisture, in someone’s mouth or in a liquid, the gas retained inside the carbon dioxide bubbles is released, causing its characteristic popping sensation as well as crackling and fizzing sounds.

Urban Legend…
Rumors persisted that eating Pop Rocks and drinking soda would cause a person’s stomach to explode. This was, in part, caused by the false assumption that Pop Rocks contain an acid/base mixture (such as baking soda and vinegar) which produces large volumes of gas when mixed through chewing and saliva. One of these myths involved a character named Mikey from the Life cereal commercials. Mikey, played by child actor John Gilchrist, was falsely rumored to have died after eating a Pop Rocks and Coca-Cola mixture – namely, a six-pack of Coca-Cola and six pouches of Pop Rocks.

On the very first pilot episode of MythBusters, Adam Savage and Jamie Hyneman put the Mikey rumor to the test by mixing six packs of Pop Rocks and a six-pack of cola inside a pig’s stomach, complete with enough hydrochloric acid to simulate the acid inside a human stomach. Despite the pig stomach growing to three times its size, it did not blow even after time was allotted for digestion, and the myth was therefore busted.