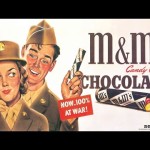 After clashing with his father—the creator of the Milky Way bar—for a few years at Mars Inc., Forrest Mars Sr. moved to England, where in 1932 he began manufacturing the Mars bar for troops in the United Kingdom. It was during the Spanish Civil War that Mars purportedly encountered soldiers eating small chocolate beads encased in a hard sugar shell as part of their rations. In an age when sales of chocolate typically dropped off during summer months due to the lack of air conditioning, Forrest was thrilled by the prospect of developing a product that would be able to resist melting in high temperatures. He returned to the United States and, shortly thereafter, approached Bruce Murrie, the son of Hershey executive William Murrie, to join him in his new business venture. Anticipating a shortage of chocolate and sugar as World War II raged on in Europe, Mars sought a partnership that would ensure a steady supply of resources to produce his new candy. In return, Murrie was given a 20 percent stake in the M&M product, which was named to represent ‘Mars’ and ‘Murrie.’

In March of 1941, Mars was granted a patent for his manufacturing process and production began in Newark,
New Jersey. Originally sold in cardboard tubes, M&M’s were covered with a brown, red, orange, yellow, green
or violet coating. After the United States entered the war, the candies were exclusively sold to the military, enabling the heat-resistant and easy-to-transport chocolate to be included in American soldiers’ rations. The company’s longest-lasting slogan reflects this: “Melts in your mouth, not in your hand.” By the time the war was over and GIs returned home, they were hooked.

Shortly after wartime quotas ended and the candies were made available to the general public, Forrest Mars bought out Murrie’s shares in the company and took sole ownership of the M&M brand. The familiar brown bag package that remains in use today was introduced in 1948. In 1950, the candies were imprinted with a black “m” (which changed to white in 1954) and customers were encouraged to “Look for the M on every piece” to ensure they were getting the real thing. Peanut M&M’s made their debut in 1954, along with the cartoon characters Mr. Plain and Mr. Peanut, and by 1956 M&M’s had become the No. 1 candy in the United States.