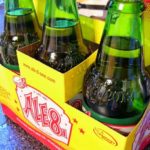 Ale-8-One, aka Ale-8 is the ginger ale with a “kick”, distributed primarily in Kentucky. It is bottled by the Ale-8- One Bottling Company, a family-owned enterprise in the small town of Winchester, Kentucky, where the beverage is especially popular. However, the Ale-8- One Bottling Company expanded its distribution to areas of southern Ohio and southern Indiana through an agreement with Coca-Cola.

Ale-8 was developed by G.L. Wainscott in the 20s. To choose a name for the drink, he sponsored
one of the first name-the-product contests in the United States. “A Late One” was chosen as the
winner. The “Ale-8-One” logo is a pun of the phrase suggesting that his product was the latest in soft
drinks.

The Ale-8 company has been through many expansions and deaths in the family but the company still is in the hands of the Rogers family. Wainscott’s great, great nephew Fielding A. Rogers is the
current president. The recipe has been a family secret; reportedly only two executives know the
exact composition.

The word on the street is Ale-8 is best to be drunk from a glass bottle, rather than cans or plastic
bottles. Some folks are fond of mixing Ale-8 with one of many types of bourbon, such as Maker’s
Mark (that’s the boss’s fav!) or Wild Turkey. “Tender Lovin” is the concoction of Ale-8 and vodka. Lastly Seagram’s Seven and Ale-8 are mixed to produce Kentucky Beer.

This is just a little history of Ale-8-One. You can make your own concoctions with Ale-8 or drink it
straight up by stopping in at Touch the Moon Candy Saloon located at 8 S. Phelps in downtown Youngstown Ask for Polly or Shags!!